Dr Mary Booth was a prominent figure in early 1900s Sydney. She began work as a doctor with rooms on Macquarie Street. However, her medical career was relatively short-lived with most of her practice being contractual, such as lecturing on hygiene.

Booth had few patients as a practicing doctor and her rooms became the setting of feminist activities, namely the founding of the Women’s Club in 1901 which sought to achieve the same club life for Sydney’s women that the men had. The president of the club was Lady Beaumont, and Booth was corresponding secretary from 1905 until 1907.

She founded many organisations focused on charity work. It was a time when charity work was the main respectable thing for well brought up women to do, and Booth continued this until her death in 1956.

In the pre-war years, the health of the nation was her primary concern in relation to these organisations, and after the war this concern narrowed into the problems associated with migration. In June 1915 she opened the Soldier’s Club in the Royal Hotel, George Street and was honorary secretary until it closed in 1923. This then became the Anzac Fellowship of Women, of which Booth was president until her death.

After World War I the Fellowship's main work focused on migration and fostering the tradition of ANZAC day. The Dreadnought Scheme was promoted by the Federal Government to encourage migration of British boys to Australia, and was facilitated by the Anzac Fellowship. The Sydney Morning Herald reports that Mr Drummond, Minister for Education at the time:

congratulated the fellowship for its work, which he said, was filling an important gap in the scheme of social life "Anzac Fellowship of Women”, Sydney Morning Herald, June 5, 1929, p.9

[the Anzac Fellowship] holds out the hand of good fellowship to Dreadnought Boys and make them feel that they have a home in Australia “Empire Service Club”, The Daily Telegraph, December 5, 1925, p.2

97 George Street (centre) served as a printers when this photo was taken in 1970, but had changed little since Mary Booth's day. (SCRA Collection)

Moving to The Rocks, the Empire Service Club was located at 97 George Street North from 1923 until 1931. It provided a welcome party to newly arrived Dreadnought boys, and after they left Sydney correspondence was undertaken to help them stay in touch with the Club, and each other, and provided advice in a range of matters. In addition, they were sent care packages.

Almost directly across George Street stood the wharves where immigrant ships berthed at Circular Quay. Here, at 132 George Street, the newly opened Department of Labour and Industry building housed the immigration department from 1923.

The impact of the welcome parties is stated in the Anzac Fellowship of Women’s annual report for 1926/7:

welcome parties had far-reaching influence in the lives of the lads, giving them a cheery start off in the new land. Annual Report for year ending 24 April 1927”, 1927, p.8

The Department of Labour and Industry building opened in 1923 to facilitate migration to Australia. In the late 1990s it became The Rocks Police Station. (1991 photo, PMNSW Collection)

The club provided a safe base in the city and good friends to the boys whenever loss of employment brought them back to the city, and a rendezvous spot for members on leave in the city. In addition to this, Booth helped raise funds, supervised the Empire Service Hostel, and published the monthly “Boy Settler” between 1925 and 1944.

In the years following World War I, when feeling for the British Empire was at a peak, the Sydney Morning Herald reported that Mrs Tawse Jollie, Member of the Legislative Council (of the Empire Parliamentary Party) was impressed by the Club:

She felt it was a very real piece of empire work, and a great comfort to the parents who had sent their sons so far. “Empire Service Club”, Sydney Morning Herald, October 11, 1926, p.12

The Anzac Fellowship of Women was:

"among the first to see that in any scheme of immigration half the battle was going to be in the area of welfare work” and that the boys “wanted to feel there was some connection a little thicker than water between Sydney and Surrey." “Migration: Empire Service Club: Problems of Welfare Work”, Sydney Morning, Herald, 31 Jul 1928, p.10.

Dr Mary Booth served as president of the Women’s Migration Council of NSW, also based at 97 George Street North, which:

welcomes and shows kindness to immigrant women when they arrive in Sydney and reassures the parents of young girl immigrants as to their welfare. “Our Public Women: Dr Mary Booth OBE”, The Australasian, February 4, 1928, p.17

Despite the important work being done by the Club, they like most other welfare organisations received little to no government assistance or notice. Due to this, the Club was in a chronic state of financial sinking, and it was only due to its members and helpers, and the ventures they undertook such as market fetes, that it kept afloat.

The Fellowship under Dr Mary Booth persuaded the City Council to let them have an old house in Millers Point to use as cheap accommodation for immigrants, which was transformed into the Empire Service Hostel. The hostel opened in 1925 and was run by the Committee of the Empire Service Hostel, a subcommittee of the Anzac Fellowship of Women. Like the Empire Service Club, the hostel received no government assistance and was frequently low on funds. The Daily Pictorial reported on its closing in 1930, after just five years of operation, at the height of the Depression:

Mainly through the cessation of family migration and increasing unemployment, the Miller’s Point Empire Service Hostel, which was established in 1925 by the Anzac Fellowship of Women, will shortly be closed. “Migrants Hostel to Close”, Daily Pictorial, August 22, 1930, p.7

Dr Mary Booth was actively involved with the New Settler’s League, the League of Nations Union, the English Speaking Union, and the Australian Institute of International Affairs. This concern with the welfare of British immigrants came from the wide-spread belief that Australia had to maintain “our own British Stock” and that doing this helped to counteract communism.

Through her involvement in all these organisations, Booth became a prominent figure in the Sydney society of the time and as such was invited to a number of major events, such the laying of the foundation stone of the Immigration Office at 132 George Street North on 27th September 1923.

Invitation to Mary Booth for the foundation stone laying ceremony, Department of Labour and Industry, 132 George Street, 1923. This occasion attracted mass protests from out of work former public servants in opposition to importing labour from Britain. These (predominantly) men had been sacked following strike action in 1917. (Mitchell Library)

Booth was also concerned with housing and town planning in The Rocks. Since 1900 the area had been a focus for redevelopment, stalled by World War I and The Depression. During this period a new generation of town planners was promoting its views on garden suburbs, fresh air and green-spaces. In her words:

I get very impatient at the lack of suitable housing for any section of the community Mackinnon: Mary Booth: a Biography, p.13

She attended the 12th Congress of the International Federation for Housing and Town Planning in Rome in 1929, which gave her ideas for how the area would be best developed, and was in favour of the planned development of The Rocks for the Sydney Sesquicentenary in 1938; subsequently prominent in the battle for better housing in the 1930s as she regarded home life as central to the nation’s wealth. The Rocks at this time was dominated by the construction of the Sydney Harbour Bridge, for which 280 homes had been demolished for the southern approach. In spite of this necessity, Booth wanted to ensure the approaches to the Bridge were aesthetically pleasing, for which she favoured an international competition, and phoned the chief engineer Dr JJC Bradfield almost daily about the protection of the trees during the construction of the approaches. In line with this, Booth fought for the retention of the Moreton Bay figs in Argyle Place in the 1930s when they were set to be removed.

World War II (1939-45) brought about vast changes to the world of Mary Booth. Post-war immigration focussed largely on displaced Europeans of non-English speaking backgrounds. The British Empire transformed into the British Commonwealth as former colonies gained their independence. The Dreadnought Boys of the 1920s-30s grew old, but regularly kept in contact through to the 1990s, and they set up a bronze memorial on the wall at the corner of Argyle Street and Kendall Lane in The Rocks. The British Empire, and its values, were swiftly changing when Mary Booth died in Sydney in 1956. 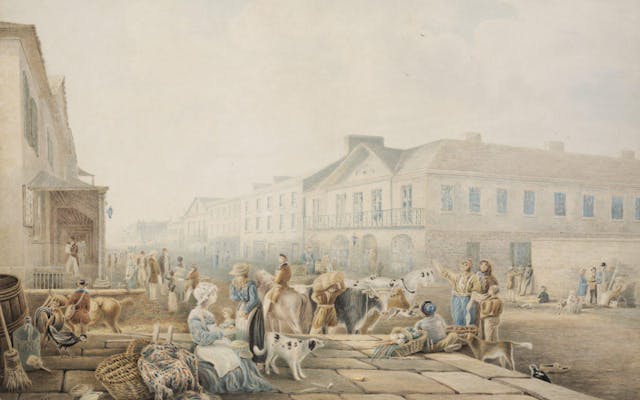 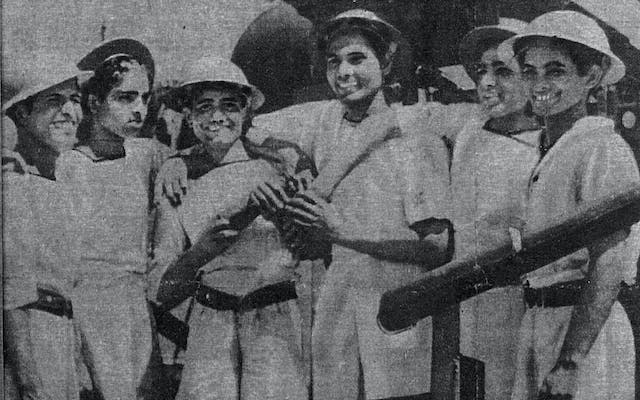 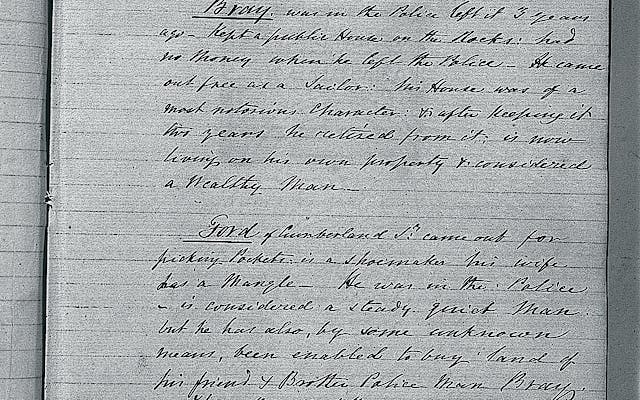 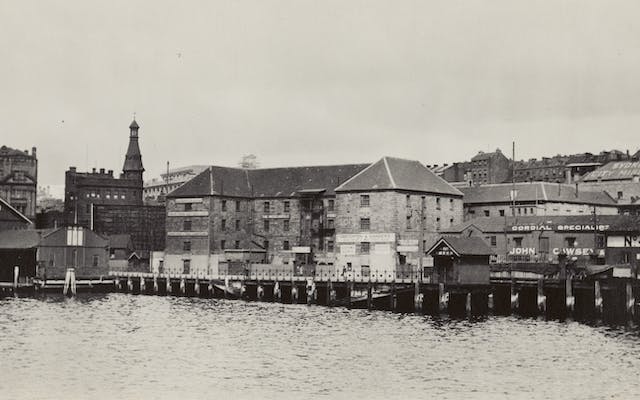 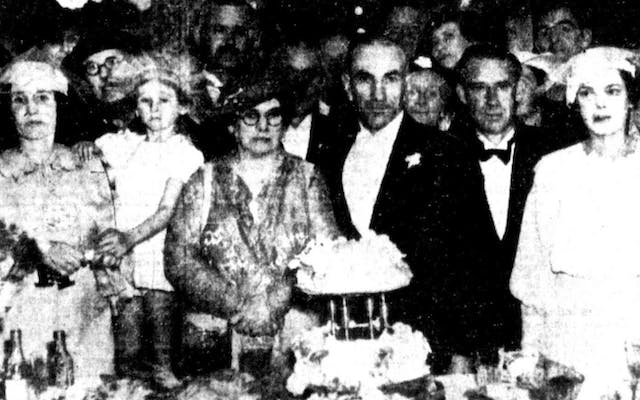 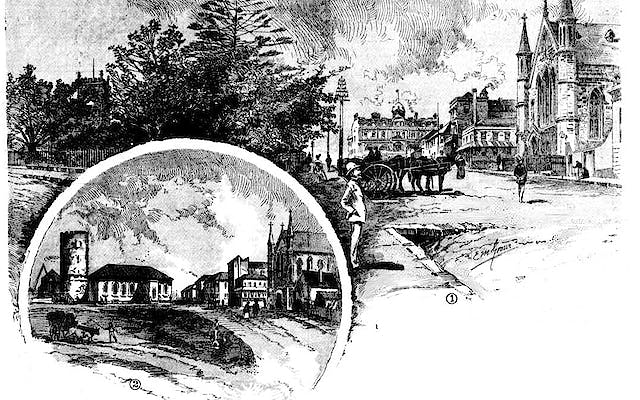 The Grandeur of the Grosvenor Hotel
For forty years it stood; its views over Sydney and the harbour unparalleled, before being demolished, along with 280 other buildings in The Rocks, to make way for the Sydney Harbour Bridge. 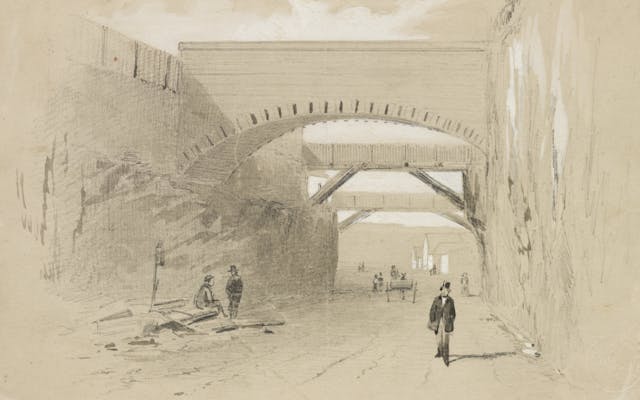 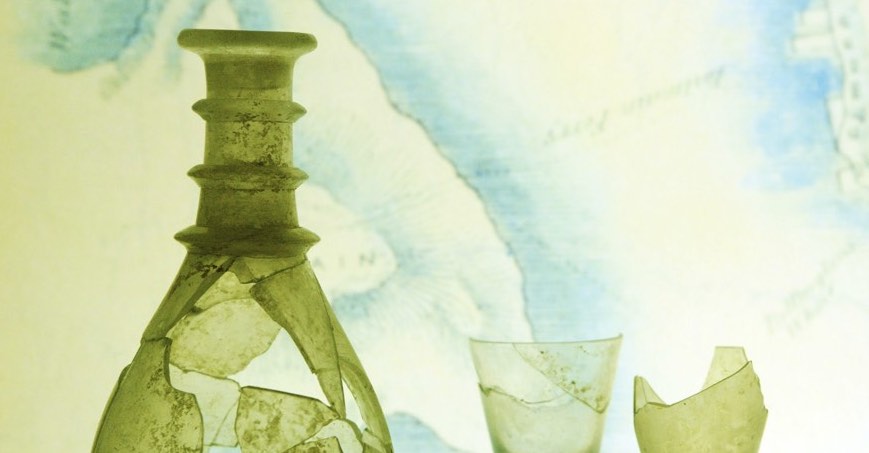